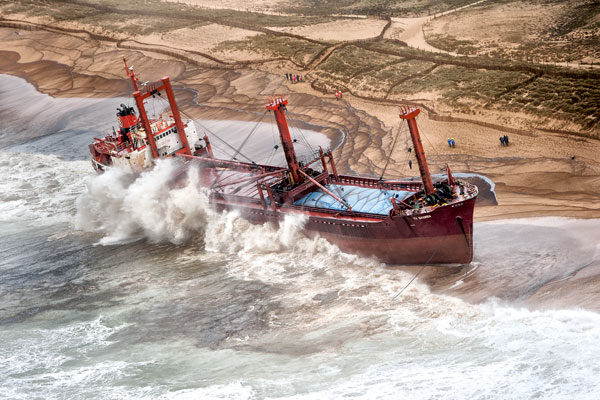 During the night of 15 to 16 December, the storm Joachim crossed France, causing winds of up to 130 km/h in Southern Brittany. The TK BREMEN, a 109-metre cargo ship flying the Maltese flag, had just unloaded its cargo of sunflower cake in Lorient. Its waiting anchorage was driven out during the night, and despite the efforts of the crew, the light cargo ship ran aground at 2am on the morning of 16 December on a beach in Erdeven.

The Abeille Bourbon was immediately mobilised to try to assist the cargo ship, but the distance between her waiting berth (Ouessant) and Lorient was far too great and, travelling at full speed in heavy seas, the Abeille arrived on site at around 7am to observe the definitive grounding of the TK BREMEN on the beach.

The hull of the cargo ship was deconstructed on site under the coordination of the Abeilles International salvage team. The cargo ship ran aground in a sensitive, NATURA 2000, tourist area, near oyster farms. This operation highlighted the expertise of the salvage team, which was able to preserve the interests of all those involved in the best possible safety conditions, while ensuring the protection of the Erdeven coastline.